English Speaking Tuk-tuk Driver in Hat Yai Thailand – Going to Thailand was a nightmare for me. Why?? I learned from other’s stories that less driver and people on the street who are able to speak English. On the other hand, I cannot speak even understand a bit of Thai language. 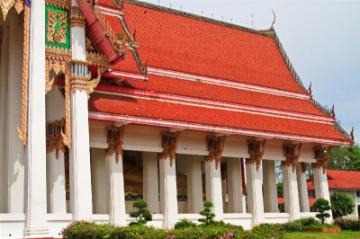 Then some people said that Hat Yai, the Southern Thailand is friendlier. Lucky I got a promo ticket to Penang which is only about 7 hours by car to Hat Yai. So this time I decided to go to Hat Yai and experience the city.

I always prepare my trip and make itinerary before leaving. Luckily, I had enough time to search all information I need from travelling communities and from other sources on internet. Gladly, I found most information I needed before I left my hometown for the holiday.

Oh ya, I assume you know what tuk-tuk is. For those who does not know, I should inform you before I go further with my writing. Tuk-tuk is a traditional public transportation in Thailand. It is a motorized rickshaw, which mostly have three wheels but the one we saw in Hat Yai was four wheels like the one we saw in Cambodia years ago. It is an open air car so you will be sweating in the very humid Hat Yai. Be aware that there is no seat belts on the tuk-tuk.

Finally I got Uncle Pee Boon’s contact. Like other Thailand citizen, this uncle uses Line other than Whatsapp to be contacted to. His responds was very quick. So I booked his tuk-tuk on the date I will be in Hat Yai. He offered some places to visit while I used his service but I can add and delete the places to visit. Finally we came to an agreement on how much the cost for one day trip).

Uncle Pee Boon, the English speaking tuk-tuk driver in Hat Yai Thailand quoted us for THB 1,000 (May 2018). Divided by three, so it will not make our pocket dry. So deal was made! As promised, he picked us up at 0700 AM in the GET Guesthouse downtown Hat Yai.

The interesting thing if you took Uncle Pee Boon’s service is he will take you to a traditional food stall for breakfast. In this place you will see how local have their breakfast. The price is cheap but the taste is very good except the rice which was too hard for me.

Uncle Pee Boon, the English speaking tuk-tuk driver in Hat Yai Thailand was a Math teacher. No wonder if he is capable to explain things to us clearly.

I really suggest you to contact Uncle Pee Boon and use his service when you are travelling to Hat Yai, Southern Thailand. It will safe you from the tuk-tuk scammer.