Dine like Yogyakarta Royal Family at Bale Raos – As you might know that Yogyakarta has a beautiful palace which is known as Keraton Yogyakarta. Keraton or Kraton means Royal Palace in Indonesia or Javanese language. This Royal Palace is open for public so anyone could visit and learn the Javanese tradition at this place. 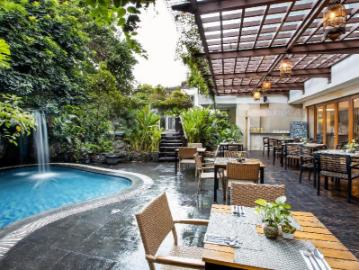 After had a couple hour tour at Keraton Yogyakarta, you might be starving. There are several good even recommended restaurants nearby the Keraton. One of the unique one is Bale Raos. Royal family manages this restaurant since Bale Raos is belong to them. You will easily find it since this restaurant is located in the keraton complex.

Why do I say that Bale Raos is unique? Beside its location is inside the palace area, the menus offered are the king and his family’s favorite. Bale Raos maintains the menus from generations. I believe it will be awesome when you could taste the favorite dish of Sultan Hamengkuwono VIII who lived in 1921-1939.

I found out that most menus are Javanese dishes but some has Dutch influence. For example, Selada Huzar or Selada Jawa are similar with salad. However, they already adjusted the taste to Javanese.

I think Bale Raos’s customer targets is middle up class. Compare to the prices of food in Yogyakarta, we could say that the food in Bale Raos is not cheap.

Bale Raos has a rich and varied menus. You could find the favorite menu of the first king to the current one, Sultan Hamengkubuwono X. The menus offered is such a complete one since you could find appetizer like salad or sup, main course, dessert and some snacks.

The service of this restaurant is considered as great. The staffs are friendly and skillful so the customers will be treated well. While the food taste good and its serving was nice too. Even though most of food was made based on old recipes, their kitchen prepared them in modern and professional methods. 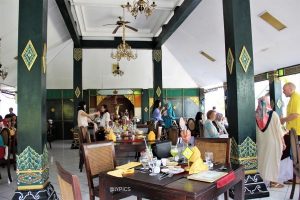 The restaurant designed as an open air building. White and green are the main colors as they have in the palace as well as the carving on the wooden pillars. There are a lot of chairs to accommodate the visitors. For those who needs a private room, Bale Raos has a nice one for you.

As you can taste most of Yogyakarta’s heritage dishes, it will be great to dine like Yogyakarta Royal Family at Bale Raos. You do not need to be part of the Royal Family to taste these delicious dishes. Generally the taste of the food tent to sweet as other food in Yogyakarta in general.

Bale Raos opens daily at 10:00 – 22:00 except on Mondays it will be closed at 15:00. On Saturday evening, there is usually a live music performance. It is a keroncong music, an Indonesian traditional music. Surely this will make your dinner more enjoyable.