Go to Batu Caves from Bukit Bintang with Komuter Line – When you are traveling to Kuala Lumpur especially for holiday, there are some interesting places to visit. One of them is Batu Caves Temple. This is a Hindu Temple located at Gombak, Selangor States, Kuala Lumpur. No doubt, this temple is one of most beautiful Indian temple I visited in Malaysia. 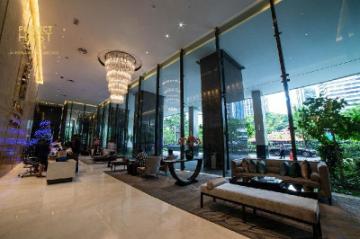 I personally have been to Kuala Lumpur several times. Whenever I had enough time to go around, I always put Batu Caves Temple on my must visit list. Even though I am not a Hindu, I love to see and visit this temple.  It is very beautiful.

Since I usually stay at KL Sentral or Bukit Bintang areas. As most of you knew, the integrated transportation in KL makes all travelers’ lives easier. Take monorail, Commuter Line or bus and now MRT are the options while you are in Kuala Lumpur. So I always take public transportation to go to Batu Caves.

Then I bought a ticket from the machine. Not too long after I inserted the cash to the machine, I got a token.  How much you should pay for the ticket? It depends on the distance. If I am not mistaken, I paid RM 2.8 for one way ticket. This is how you could calculate the rate!

The token is used to access the station’s automatics entry gate. Tapped it on symbol you could see on the automatic door then it will be opened. Soon you would be inside the station. Even though there was 2 platforms only, you need to pay attention on which platform you should take.

You should take the monorail which is heading to KL Sentral.  You would only pass 6 (six) stations to reach the biggest station in Kuala Lumpur. They are Bukit Bintang, Imbi, Hang Tuah, Maharajalela, Tun Sambanthan and last station is KL Sentral.

Then you need to enter the NU Shopping Mall to get into the KL Sentral Station. Just follow the direction. If I am not mistaken, you should take escalator and go up one floor to reach the main station. You need to find the counter of KTM Komuter. It’s located on the left side of the hall if you came from the NU Shopping Mall.

Here is the route map of KTM Komuter Kuala Lumpur. Since my destination was Batu Caves station which is next to the Temple, I bought the ticket to this station. It was the last station of the journey so I did not need to worry where I should stop.

According to what I could remember, the fair from KL Sentral to Batu Caves was like RM 2.6 one way. It took about 40 minutes. From the timetable, I learned that the first train will leave the KL Sentral at 06:56 then will go regularly every hour. I suggest you to go to Batu Caves in the early morning to avoid the crowd.

After got the token, you should go the waiting area of KTM Komuter. According to the destination was 4 (four) platforms. One platform accommodates several routes. So you should pay attention which train is going to come. Once your train comes, you should get in to the carriage and pick the seat.

The train was clean and comfortable. You will know where are you at as the announcer will tell you from the speaker. Eventually, I arrived at the destination, Batu Caves Station. I got down the train, walked out the station and straight to the temple. It was very easy to go to Batu Caves from Bukit Bintang with Komuter Line. Ah, I miss Kuala Lumpur.